What is the future of Office-Based Endoscopy? - Rockett Healthcare Strategies

What is the future of Office-Based Endoscopy? 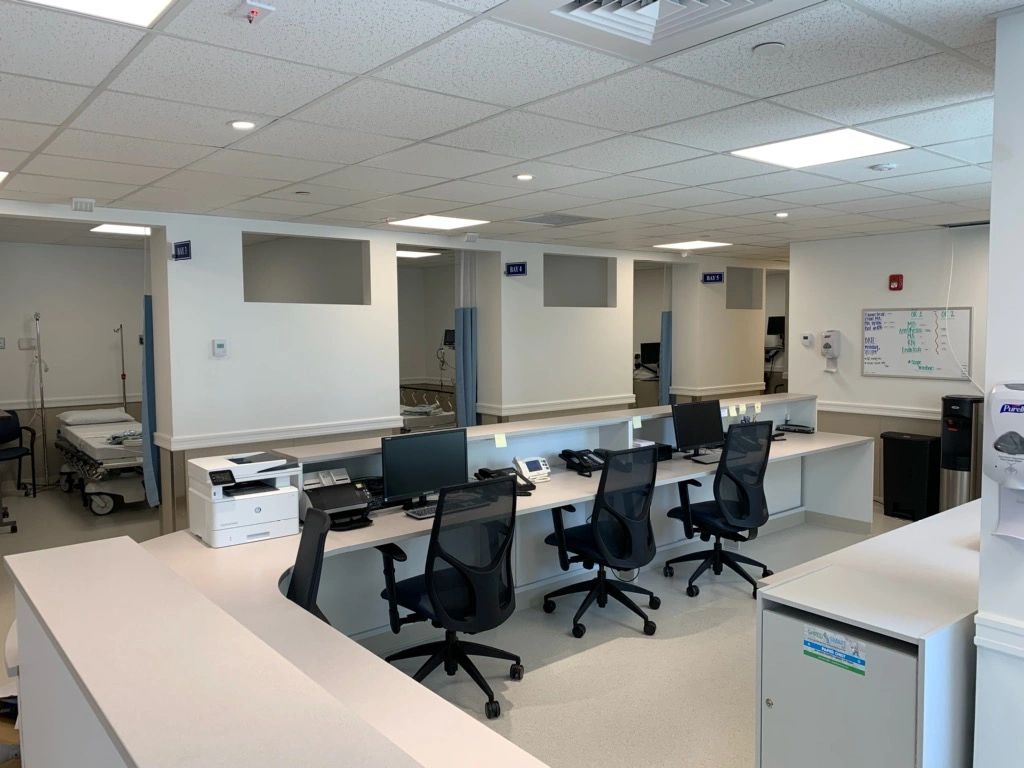 Many doctors across the country have invested in the proper equipment, built out
their offices to accommodate procedure rooms, achieved accreditation for
ambulatory procedures, and hired staff to provide office-based endoscopy
procedures. With patient safety and convenience being of the utmost importance,
these enterprising physicians forged ahead with office-based endoscopy in hopes of
receiving appropriate reimbursements from health plans.

In doing so, they are now finding obstacles at every turn. My experience in leading
an Office-Based Surgery (OBS) and endoscopy accreditation company that
attempted to contract with health plans for enhanced office surgery fees and
endoscopy procedures, shows that in many instances, the deck is stacked against
such office-based practices.

While health plans want to encourage doctors to perform endoscopies in high
quality, cost effective, accredited settings, their options in most states include
many ambulatory surgery centers (ASCs) that provide high-volumes of
gastrointestinal procedures. In other states, the ability for physicians to build and
own a licensed surgery center is not attainable due to strict regulatory processes or
laws on physician ownership. For these physicians, office-based endoscopy has
been their only solution.

There are strong forces at work in the American healthcare system that make it
quite difficult for office-based endoscopy to be successful on a widespread basis.
These forces often include the health plans’ traditional provider contracting and
reimbursement strategies. They also include: state health department regulations
in about thirty states that have standards for office-based procedures that
involving anesthesia; the presence of about 5,000 ASCs across the country; the
impact of hospital systems and their lobbying efforts to protect their share of the
healthcare market.

Herein lies the question: With the regulatory forces, the strength of hospital lobbies
and the indifference shown by health plans, is office-based endoscopy a viable,
sustainable strategy, in comparison to participating as an ASC physician-investor?

Consider the regulations in your state.

For office endoscopy, there is a maze of regulations addressing the issue of how to
conduct procedures under anesthesia in a physician’s office. About thirty states
have enacted regulations or guidelines to follow. The state with the most stringent
regulations is New York, where there are hundreds of office-based surgical (and
endoscopic) practices. The legislative process to enact regulations in New York took
at least ten years and culminated in the enactment of the Office-Based Surgery
Law in 2007 with registration and accreditation requirements taking effect in July

Hundreds of medical practices across many different specialties (gastroenterology,
urology, plastic surgery, gynecology, pain management, etc.) complied with the
accreditation requirement, which increased their costs to continue performing
office-based procedures. In an effort to defray the additional costs, many
attempted to bill health plans for a ‘facility fee’ or some other type of
reimbursement. Health plans in New York have almost uniformly rejected payment
of those fees.

In particular, the recent trend in New York is away from office-based procedures
and toward forming ambulatory surgery centers (ASCs), for which New York
regulators have eased the restrictions to allow the development of more ASCs.
Prior to this recent period, there was a tacit moratorium in effect on the
development of ASCs, but now the State of New York is allowing centers to form.
Such entities are subject to the more comprehensive regulations imposed on
‘Article 28’ healthcare facilities.

Other states may require OBS (Office-Based Surgery) accreditation by one of the
three national accreditation agencies (The Joint Commission, AAAHC, or AAAASF) or
recommend following ASA guidelines (American Society of Anesthesiologists
Guidelines for Office-Based Anesthesia) for anesthesia-assisted, office-based
procedures. The emergence of office-based practices state-to-state, largely
depends on the regulatory environment Certificate of Need (CON) law,
accreditation requirement, etc., as well as the market conditions regarding
reimbursement, prevalence of ASCs and the position of the hospital political lobby.
In about half of the states, ASCs are subject to CON regulations. They are also able
to become Medicare certified. Medicare certification and accreditation for ASCs
provide quality care assurance and patient safety compliance guidelines. In
addition, ASCs are now routinely subject to on-site surveys by representatives of
CMS (Centers for Medicare and Medicaid Services). All these provisions give health
plans, and their subscribers, a higher level of quality care assurance and a safe
operating environment, thus making the health plans more likely to contract with
ASCs as opposed to office-based practices.

Regarding payer mix, office-based procedures will be compensated a Site-ofService (SOS) differential per procedure by Medicare and Medicaid, in addition to
the professional fee for every procedure performed in the provider’s office. A
thorough cost benefit analysis is required in order to determine if the SOS
differentials paid by Medicare and Medicaid will be sufficient for the practice to
perform those procedures in an office setting. If no cost benefit analysis is
performed, these procedures should remain in the hospital or the ASC in order to
prevent a loss of profit on each office-treated Medicare patient.

Commercial health insurance carriers follow Medicare guidelines of paying SOS
differentials for office-based procedures. Innovative health plans such as Blue Cross
Blue Shield of Illinois (BCBSIL), on the other hand, introduce a reimbursement
program to incentivize gastroenterologists to become accredited by one of the
national accreditation agencies as well as to perform their higher volume GI
procedures (diagnostic colonoscopies, EGDs, etc.) in their accredited offices. The
additional professional fees paid by BCBSIL are sufficient to provide a reasonable
incentive; however, no other health payers in Illinois have followed suit with similar
incentives.

Several years ago, a similar incentive program was implemented by Anthem Blue
Cross Blue Shield of Virginia, which provides incentives for selected procedures
across multiple specialties. Virginia is very restrictive regarding single-specialty
ASCs, and that is reflected in the arduous CON process required by Virginia’s
Department of Certificate of Public Need. Most office endoscopy practices in the
state adhere to CMS requirements in order to qualify for Medicare reimbursement.

Considering the options, OBS or ASC, requires assessment of potential revenue and
expenses from both avenues. ASC management companies, such as Physicians
Endoscopy, are well versed on the intricacies of cost projections and expected
revenue for endoscopy centers. These projections have been fine-tuned over their
years of experience with multiple ASCs, thus becoming more reliable.

Careful consideration is due regarding the next steps.

Before deciding on a future OBS or ASC strategy, consider the following:

Keeping up with the times.

As healthcare transitions occur, another interesting phenomenon has developed in
New York, and perhaps elsewhere: many office endoscopy practices have decided
to combine their resources and form state-licensed ASCs. With the loosening of the
approval process for licensed ASCs by New York’s Public Health and the Health
Planning Council, many office endoscopy providers have made the transition to
becoming physician investors in ASCs, thereby enjoying the inherent advantages of
being part owners of a state-licensed Medicare-certified facility.

Looking to the future with ACOs and risk-based reimbursement arrangements, the
shift away from solo practitioner or small practices, to larger practices and
integrated health systems, has certainly accelerated. Physicians are better off if
they become part of a larger organization, rather than keeping their separate
practices. In states with CON regulations, physicians typically become investors in
endoscopy centers that are partnered with a hospital or a health system.

Increased provider consolidation leads to stronger negotiating leverage. Using the
influence of the health system in an ASC partnership, has proven successful in
negotiations with health insurers. This model is no guarantee for success, but it has
strong advantages in the new world of risk-based reimbursement systems.

In my years of involvement with both office-based practices and ASCs, I have not
seen this partnership model benefit the OBS practitioner to the extent that it has
the ASC. OBS will likely remain in certain areas and certain specialties (particularly
cosmetic surgery), but it is not likely to be universally accepted by the health
plans, the state regulators, or Medicare.

"Rock and I met when I was considering joining an existing endoscopy center. He helped me do the analysis that showed I'm better off doing procedures in my office and taking advantage of the rates he has negotiated with payers in the Chicago area. In addition to helping me design my center, equipping it, and getting it accredited by AAAASF, Rock has helped us implement multiple revenue streams and significantly increased professional fees over my prior rates. He also worked diligently to recover thousands of dollars in payments from our major payer that had been miscoded and denied."

Endoscopy Center of the North Shore

"Rock Rockett helped us to successfully launch our first healthcare product in the US. His knowledge and experience were instrumental in helping us understand and navigate a complex health system. We are thankful for his guidance and are excited to see what the future holds."

"We contracted with Rockett Healthcare, LLC to help us develop our endoscopy center and contract with payers. Rock led a very successful contracting effort with the payers and we are earning combined facility and professional fees for office-based procedures that are 200-300% of Medicare ASC rates(depending on the payer). Rock achieved this for us by educating the local Hawaii payers on the value of office endoscopy in Hawaii's regulatory environment which makes it difficult to obtain an ASC license."

"Rock and I met about 10 years ago when he led the negotiation process to get higher rates from our major payer for office-based procedures. He and his team helped us get our office endoscopy suite accredited and successfully completed negotiations with other payers.

More recently, I engaged Rockett Healthcare, LLC to evaluate the financial feasibility of merging with another GI group in our area. He did a terrific job of assessing the risk and reward potential of that transaction. He regularly proposes new strategies to better manage the practice and grow revenue. Rock is very prompt, forthright gets the job done expeditiously.

Rock’s contacts in the health care/insurance industry and his understanding of medical practices puts him in a unique position to advise physicians."

"We worked with Rock from day one of our project to develop a two room endoscopy suite for office based procedures. In addition to guiding the project from start to finish, he also has contracted with almost all of our major payers. His negotiations yielded rates with the payers that are 3x what we were getting when we did endoscopy procedures in surgery centers and hospital outpatient settings. We are grateful for his expertise and persistence in negotiating higher rates on our behalf."